So, it has been a long time since I was last able to publish something on here and I’m glad to be back… for now. I guess you could say we didn’t stay with the “A’s” as we also visited Great Falls. Conversely, we could really stretch the definition to quadruple A as we visited the Arboretum (National Arboretum). However it is defined, this was a fun last minute road trip. By last minute, I mean extremely last minute. I’ve tried to make it a yearly tradition to take time off for my birthday and do something or go somewhere. Of recent years, that has combined doing the American Cancer Society ACS bik-a-thon (a very worthy charity if you are into cycling) and taking a short trip. This year my partner Teena and I were leaving our travel plans to a last minute decision. It came down to this road trip and a last minute cheap flight to anywhere. Unfortunately the last minute cheap flight had many travel date restrictions which did not work out so the road trip won out.

Getting there, we opted to forgo traveling down I-95 and took the back roads through Delaware and Maryland crossing Kent Island and the William Preston Lane, Jr Memorial Bridge which all but takes you right into Annapolis. On Kent Island we took a little side trip to the Southern point of the island which was met with road construction and a private road which thwarted reaching our destination point. On turning around, we saw signs for “Historic Stevensville” and decided to check that out instead. Warning, if you plan on seeing this, do not blink. No this is not some obscure Dr. Who reference. The historic downtown is literally the meeting of several corners. It passed so fast we literally had to go back to confirm what we saw, err, or rather, didn’t see. So onward to Annapolis. 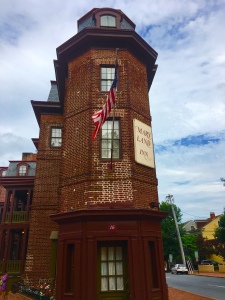 Overall, Annapolis is a visually charming town with small, colorful row homes. There are a lot of the typical tourist shops selling trinkets and T-shirts. It is apparently home of the sailboats “Woodwind I” and “Woodwind II” the latter of which is featured in the movie “The Wedding Crashers”, at least according to the tourist map. And in case you didn’t already know, home of the U.S. Naval Academy. However I have to say, to me, the town was a little too small. I’m not speaking in overall acreage but more of the size of the streets and how close together the buildings are situated. It was a little claustrophobic to me.

That said, what it lacks in street width, it makes ups for in dining and libations. Admittedly, we were only there for one night so it is possible we

picked the best two places but I doubt that. Our first stop was the Fox’s Den. Situated in a sub street level unit under other stores and restaurants, its location, decor, and drink selection gave it a speakeasy feel. They have a nice selection of cocktails of which the Penicillin 1870 and District Boulevardier we can speak for as being quite excellent. Additionally, they have a unique craft beer selection and the coconut cream ale I ordered had a perfectly sculpted head in addition to being the smoothest beer I have ever had. Not enough O’s in the word smooth to describe its taste (sorry Genny Cream Ale). We then moved on to find our dinner for the evening. For this I have to give credit my partner Teena for seeing that Café Normandie had

rabbit on the menu, a recent favorite of mine, in the form of a rabbit pot pie. The restaurant has a

rustic feel to it and though they have a rather refined appearing menu, nothing about the restaurant came off as pretentious either. We opted for a bottle of wine with dinner. While I would like to come across as a connoisseur of fine wine, I honestly just recognized the name “Rothschild” from TV and movies when I ordered the Château Malmaison-Rothschild, Médoc. It was a good gamble as the wine was not only good on it’s own but went very well with the rabbit. The portions were plentiful, so much so, we had no room left for dessert. We soon went back to our hotel and drifted off into our food coma induced sleep.

The next morning we were off to the DC area. Our first stop was to the National Arboretum. While there is no admission fee, they do work partially off of

donations. They have quite the impressive collection of Bonsai trees on display, some growing since the 1600’s. Overall, I’m for any green space within city limits. However, traffic noise was quite noticable which did take me out of the moment at times. Likewise, I would have liked to see more foot paths through the park rather than or in addition to black top roadways to get around. It’s a very worthwhile excursion but I might recommend doing it during the cooler spring or autumn months.

We then made our way to Alexandria, VA and the Hampton Inn which would be our accommodations for the next two nights. Though outside of the Old Town district of Alexandria, that was balanced by the overall room price, the inclusion of a hot breakfast, and a free shuttle to and from Old Town making it’s location rather moot. Over the next two nights, we fully took advantage of the shuttle and wandered up and down King Street sampling numerous watering holes and their various cocktails as well as multiple restaurants pacing ourselves with appetizers and

meals. There is such a multitude of great places to eat and drink, I think one would have to work hard to be disappointed. While I can’t go into detail regarding every place we ate, I can at least list a few of them. La Tasca has amazing tapas style appetizers and sangria, Hen Quarter has great fried chicken, comfort food, and bourbon (and bourbon flights). If you prefer something a little more mainstream but still with it’s own identity, check out a regional chain called Blackwall Hitch. Like more of a dive bar feel (said with all due respect) hit up the Bayou Room, the lower level of Two Nineteen

Restaurant. There seems to be something for everyone on King Street. The one place that stands out from all the rest also happens to be another French place, La Fromagerie. They have a wonderful assortment of cheese and charcuterie you won’t find at many places. Additionally, their wine selection is even more unique. I asked our server if she could surprise me with a wine I would not normally be exposed to. I was presented with a 2016 Domaine De Clovallon Les Indijènes. From what was explained to me by our server as well as reading online, this is an unfiltered wine that is allowed to ferment spontaneously that comes from old vines which had survived a regional catastrophe. The result was an aroma of berries that was slightly musty and a taste and feel that was earthy with a hint of fruit, dry, and mineral like. It was without a doubt the most unique wine I have ever had. Despite what you may think from my description, it was quite excellent. As an added bonus they have an out of place yet hilarious painting of John Goodman from The Big Lebowski. I am most certainly this eatery’s target demographic. 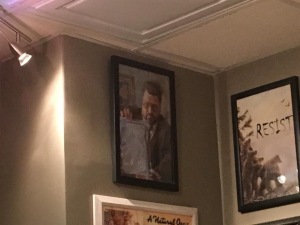 Old City Alexandria has much more to offer than just food and drink. Their waterfront region is quite vibrant with parks making for a nice evening stroll as well as water taxi services to DC  and National Harbor. So nice, it makes me wish nearby Philadelphia could / would bring theirs up to par. There are ghost tour bar crawls and many small museums we did not get a chance to visit while there. Additionally, they seem to support local artists a great deal. To be repetitive, there truly is something for everyone. 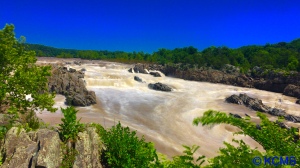 The Next day we proceeded to Great Falls National Park. It’s a very short ride outside of the DC area but a world away in

scenery. It is a National Park so there is an entrance fee of $10 per vehicle which covers all passengers that is good for 3 days (or $5 per person by foot or bike). As the name suggests, this is home to a rather splendid water fall. There are several viewing points to get that photo op you are looking for with two of them wheelchair accessible. There are also multiple hiking trails, with one that goes through the ruins of the old canal locks. The falls are as great to view as listen to and the trails are nicely kept and marked. Though I have to say the “ruins” are a bit underwhelming. Afterwards we then went to the George Washington Masonic National Memorial. This stop piqued my interest as I have a fascination with the Masons, the Knights

Templars, and their rumored connection. As one might expect, it is quite lavishly ordained in its architecture with highly

sculpted columns, murals, and statues. There are several floors with varying information regarding Washington himself, the construction of the monument, and the Masonic organization itself. The 9th floor has an observation deck with a great view of Alexandria and DC in the distance. While Alexandria has Philadelphia beat on the waterfront, Philadelphia’s Masonic Temple and tour far outweigh the George Washington Masonic Memorial. 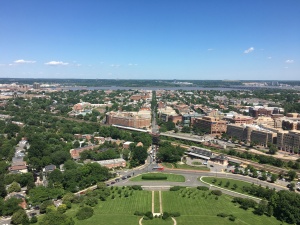 Our final day was spent visiting Arlington National Cemetery. For what the George Washington Masonic Monument has in
its opulence, Arlington has in it’s simplicity, tradition, and somberness. Whatever your opinions are of war and the governments who engage in them, I think and hope we can all agree those soldiers who have defended  their country during times of war should be honored. It takes a special person to put their life on the line for

something larger than themselves. The tombstones and memorials are beautiful in their simplicity with maybe the exception of the Memorial Amphitheater

which is not only ornate but quite large in stature. Overall, it is a crossroads of beauty and sadness. Many memorials create a place for quiet contemplation and introspection such as the eternal flame marking the grave site of JFK and Jackie Kennedy. Those who guard the Tomb of the Unknown Soldier are rather awe inspiring in their precision of motion, dedication, and commitment. The changing of the guard alone is worth visiting these hallowed grounds. Though I had visited here years prior, I am glad we decided to include this on our trip. 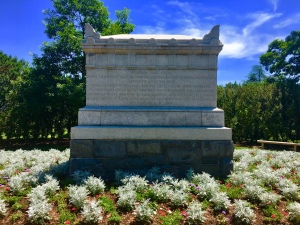 So many people make visits to the DC area specifically to see the nation’s capitol. I’m not saying there aren’t things to see in DC. However, do not overlook the areas surrounding the capitol. There is much in the way of history, nature, and entertainment around DC that one should check out. Specifically, I can’t recommend Alexandria enough. So much so, that my partner and I are already looking to go back.

Check Out My Other Projects